There’s nothing like starting on a fresh server! A time when EVERYONE is rolling new characters and starting adventures in Norrath together is a unique EverQuest II experience that YOU will be able to join soon! 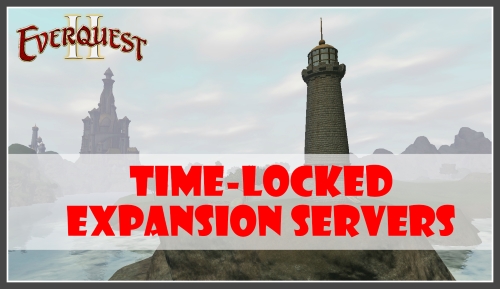 We’re launching two Time-Locked Expansion Servers (TLE) in the coming weeks! One will be PvE. One will be PvP. Because your opinion is so important to us, we want to get you in game and giving us your feedback ASAP. We’ve got in-game polls starting this week and then on Tuesday, July 7 we’ll begin public beta tests for both of our TLE servers!

What IS a Time-Locked Expansion Server?

These are special servers for All Access members that are locked to a period in EverQuest II’s history. As time passes additional expansion content unlocks on these servers. You can vote on unlocking preferences in our polls starting today. We will also be polling each server community after launch so those players can determine their server’s future.

You Control the Destiny of These Servers

Your choices will impact how the TLE servers thrive! We’ll be looking to the player community for feedback and running in-game polls to see what YOU want on these servers.

The first TLE Server polls start TODAY – one for PvP and one for PvE -- and will run until June 23. We’ll have another poll next week so you can decide the names for these servers.

I Want to Know More!!

Kyle “Kander” Vallee, your lead designer, has you covered! Learn more about what our current plan is, ask questions, and provide feedback to our team.

We’re excited about the TLE Servers, and based on the feedback we’ve seen on the forums we know you are too. The team is working hard to get these new servers ready for you and we’re excited to start our adventures in Norrath (again) with you!