Just stopping in to give everyone the low down on the new Fabled Echoes of Faydwer zones we will be releasing today. 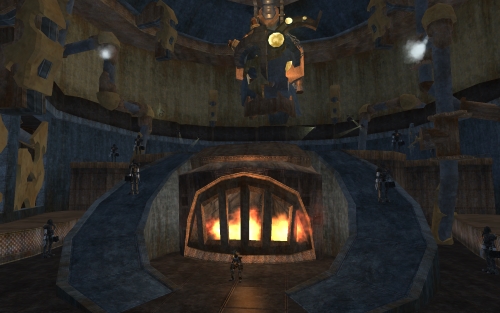 People are asking what zones will become Fabled and what play styles will be covered. The answer is we tried to cover as many as possible with this release. We have 3 Fabled Echoes of Faydwer heroic zones: The Acadechism, The Court of Innovation and the Crypt of Valdoon. We also decided to make an advanced solo version of each of these zones for our solo players and are releasing the Fabled Freethinker Hideout raid zone in two flavors, Normal and Challenge.

So what are these awesome zones going to be dropping? We are going to give everyone a sneak peak of where we are going with the itemization in the next campaign and we think you will be pleased with it! We will be dropping limited slots in the Fabled Echoes of Faydwer zones, but many of these items will show some new stat layouts as well as where the progression for gear is going. There will not be items for every slot, but these items should be nice upgrades for each of the respective play styles. Also, as we did in the Rum Cellar zones we are going to be dropping some new cloaks in the Fabled zones in the same style as the belts. Giving people some clear upgrades for these slots.

Expect to see lots of new collections for the Fabled Echoes of Faydwer zones with a very nice end reward for those who venture to complete all of the collections in this new content. You will also have new timed missions, new achievements, and some new titles to flaunt.  For those mission addicted, you’ll find a new awesome meta style reward, too.

Don’t forget we have a new Erollisi Marr deity quest line coming up in early July, as we are adding her to the pantheon of gods you can worship just in time to take her place in the new Deity System we have planned for the campaign this fall. If you have time, check out the in-game calendar for a preview of some awesome prelude events coming soon for our fall campaign release.

We are hard at work on the fall release as well as getting ready for the new Time-Locked Expansion servers which are hopefully just around the corner. Speaking of the new servers, we put up posts encouraging everyone to chime in on what they would like to see their PvE and PvP servers named. After removing anything that is a current or past EQ or EQ2 server and anything that did not adhere to the current naming conventions, here are the names that everyone will be voting on for your TLE Servers! Should Time-Locked Expansion Servers prove to be incredibly popular, we will use the runner up names for future servers that could be launched.

The names you will be voting on for your new TLE PvE Server are:

The names you will be voting on for your new TLE PvP Server are:

We want to thank all of you for the super participation in our TLE server naming threads and in-game polls.

See you in Norrath!