Paying it Forward with Fille

Meet Fille, an organizer of Pay it Forward events on EverQuest II, and learn about how these events began.

Paying it Forward with Fille
By Colette "Dexella" Murphy
This year, a Pay It Forward event has been organized by players on the Antonia Bayle server to celebrate the Frostfell season. These charitable events have been springing up on multiple servers as community members aim to reach out to new adventurers and help them on their travels.
I recently chatted with Fille, who began Pay It Forward events on the Freeport server back in 2010. Here's what she had to say! 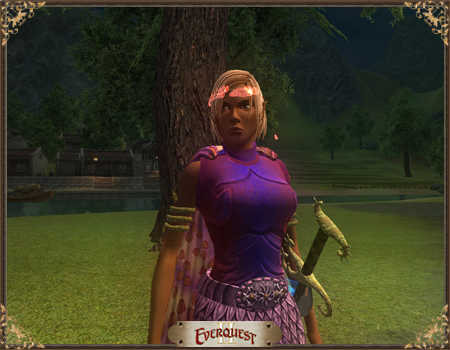 Dexella: First, can you share a little bit about what Pay It Forward events in EQII are?
Fille: If you tell someone to pay it forward it's instantly recognizable, no matter who you are or where you come from. But for those who don't know: It means that if someone does some random act of kindness for you, you should do your utmost to return the favor and do something kind for another random person. That person, in turn, will pay forward the kindness to someone else – so that it grows and grows and eventually touches everyone in some way. Pay it Forward on EQ2 is a player-run charity event that uses this philosophy as its core.
Dexella: When did you first come up with this idea?
Fille: This practice of paying it forward is nothing new for the Everquest 2 community. For example, if you drop by Freeport server and read general chat, pretty much every day someone is doing something kind and wonderful like giving away 44-slot bags or helping out a new player with gear. It's part of what makes this game great.
Back in 2010, myself, Wyldsugar, Furiouscheese and Nergal (and a few others, ack, forgive me for getting old and addled and forgetting!), stood on the Thundering Steppes docks with bagfuls of goodies and started telling folks in 1-9 general chat to come see us on the docks to get a free treat. Once they got something, we asked them to pay it forward in some way. We had noticed a shift in the mood of the server and we wanted to do something to lift spirits and show kindness. Nothing brightens a day or helps build a sense of community more quickly than a random stranger doing something kind and generous without ever expecting anything in return.
That day, however, we expected a few people, but what was utterly amazing is that shortly after we started announcing in general chat more and more bodies started appearing. We worried that we wouldn't have enough for everyone – until we realized that other kind souls, about five or six others, had quietly joined in with us and were giving away items, too! It made me realize that I wasn't alone in my desire to create a welcoming community – and that the simple act of giving can give you this wonderful rush of happiness.
Dexella: How has Pay It Forward changed over time?
Fille: The event has grown beyond my expectations! Partly because I'm a very stubborn and determined woman, but mostly because of the wonderful volunteers who step up and host the event each time we run it. Without them, there would be no event. Without players being so generous in donating items, there would be no event. It has blossomed not because of me, but because of the remarkably generous response from EQ2's playerbase.
After running it a couple times on Freeport and watching it grow from about a dozen people on the docks in Thundering Steppes to more than 50 at the second event on Mara, I decided it would be nice to spread the enthusiasm and happiness it brings. It's a bit intimidating to log onto a server you don't play on and pitch an idea, I was terribly nervous, but I so truly believed in the message behind this event and had witnessed such an incredible surge of player goodwill after our Freeport events, I was determined to try to draw in as many other servers as possible. So I'd systematically log on as Fille on all the different US and EU servers and make my plea for a host volunteer for the event. I'd get some heckling, but after I explained what the event was about, something wonderful happened. People started sending me tells and volunteering and saying they loved the idea! Soon we had almost all the servers on board for the third Pay it Forward event. 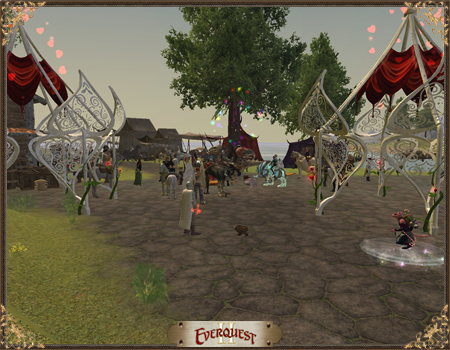 Dexella: What has surprised you the most about this event?
Fille: The most surprising thing about this event is how generous everyone has been. Honestly, folks didn't have to come out and support it or donate anything, yet the response has been wonderful and overwhelming. Hardcore raiders on Freeport came out and donated rare items and happily watched the jaw drop on the person who received the item. Thousands of plat has been donated over all four events, high-tier adornments, reactants, gear, you name it – all given without expecting anything in return. And that's the key: Items are given willingly and without expectations other than to help us all build a better community. And I'm so proud of our playerbase that the majority respect the meaning behind the event and DO go out and help others afterwards. And I'm not talking just a handful of people, I'm talking the majority.
Another lovely woman I know, Eliohia, who's been on board with Pay it Forward since pretty much the start told me she decided to take the sentiment behind the event out into the real world and helped to organize a charity event for a local animal shelter. She's an amazing woman.
But better still were the reports back from the volunteer hosts on other servers, whether in the official thread on the forums, or via emails in-game. Even though there were some first-time event bumps and hiccups with some servers, the kindness was spreading and the hosts reported having a great time! The enthusiasm and efforts by these volunteers are both infectious and inspiring. I cannot thank them enough.
Dexella: What are the plans for the future? Are you planning more events?
Fille: I plan on running another event as soon as my life settles down – it's a bit chaotic at the moment and unfortunately I can't commit to any date until I figure out where I'll land. But watch the Player Events section of the EQ2 forums – and of course watch for me logging on as Fille to harass your server for a volunteer. And I wanted to thank all of you for making Pay it Forward so special. Everything you do and everything you donate helps to build a welcoming and wonderful community and makes this event something we can proudly claim as our own.
Thanks for taking time to chat with me, Fille!
And to all fellow Norrathians, if you're planning a player event (like the Pay It Forward – Frostfell Edition on Antonia Bayle!), please post in our Guide and Player Events forums or send me a private message on the forums.
Happy Frostfell, everyone.
~Dexella