If you’re on the Antonia Bayle server, make sure you visit the Isle of Mara on December 29th for a Pay It Forward Event!

Norrathians! Frostfell may be a time when we get gifts from Santa Glug, but it's also a time where we can give gifts back to one another! If you're on the Antonia Bayle server, make sure you check out this Pay It Forward event on Saturday, December 29th.

What: Pay It Forward, Frostfell Edition
When: 1:00 pm PST*
Where: Isle of Mara, Antonia Bayle Server
Details: Layla, one of the event organizers, says: "Clean out your banks and polish up your tradeskilling tools! Let's help the newbies out with gear, stuff, and coin. All they need to do in return is show the same generosity to someone else in the future. This is an awesome way to spread positive energy and holiday cheer all over the server!"
Needed:

If anyone is interested in helping out, please contact Arquenniel, the guild leader of the Knights of Freeport!
Taysa, second in command of the Knights of Freeport, had this to say about the Pay It Forward event:
"Pay It Forward was originally started on the Freeport server. When I saw the post on the forums, I immediately took to my guild and asked if we could start this on Antonia Bayle. The idea was very well received and despite the Knights of Freeport being the hosting guild, roleplayers from many different types of guilds came to hand out donations, give advice to new players, and we even had someone take on the role of storytelling in a tent.
The reason behind Pay It Forward is to first and foremost reinstill the notion that we are a community, and communities need to work together. Antonia Bayle is home to the greatest roleplay community out there. A community like ours won't be found on any other game. The reason behind getting the roleplay community, in my mind, behind Pay It Forward was twofold: 1) To first and foremost welcome those that are new to Everquest 2 into the game, and give them a pressure free environment to make new friends while receiving donations to help them on their adventures and 2) To lessen the gap that separates the roleplay community from the rest of the general population.
In a game as old as Everquest 2, it is easy to forget the humble beginnings of an adventurer just starting out. New players can get lost in the rat race to end game, ending up frustrated. It is important to be welcoming to those new to us. They could very well turn out to be our next fellow raiders, group mates, roleplayers, or, most importantly, friends.
During the holiday season, when generosity is on the forefront of everyone's minds, we felt it would be an appropriate time to launch another Pay It Forward. It is our hope that the generosity exhibited by veteran players on this day will be turned around, and those new players on the receiving end will offer the same kindness to someone else." 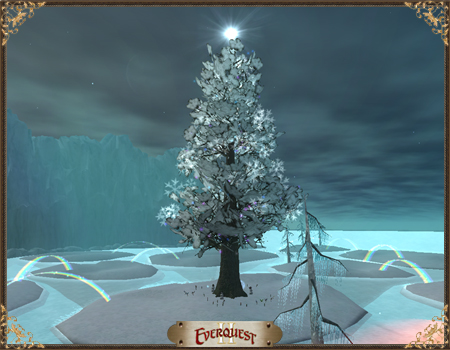 Want to know more about the beginnings of these types of events? Check out this interview with Fille from Freeport!

Share On:
Previous Article News Archive Next Article
Happy Holidays from SOE!
Paying it Forward with Fille
Download
Filter By: