With Arcanum Revealed, you'll be able to appear on one mount while gaining the benefits of another, and keep your in-game currency a little more organized, as well as cure whatever ails your allies with just one click.

With Arcanum Revealed, we'll be introducing a few new changes to your Character window, and an enhancement to the way you cure detriments. Soon you'll be able to appear on one mount while gaining the benefits of another, and keep your in-game currency a little more organized, as well as cure whatever ails your allies with just one click.

The Mount tab inside your Character window will now give you a place to store your mounts outside of your bag and bank slots, and will also let you use the stats of one mount while appearing on another of your choice. 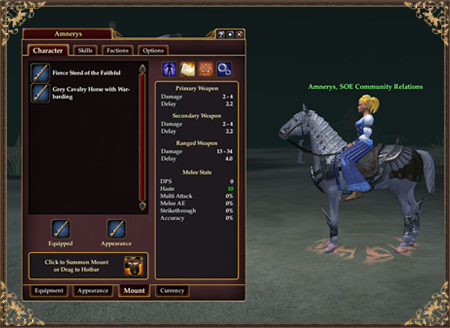 To use this function, simply drag your mounts to the window and drop them in the list. New mounts will automatically be added to the list when they are purchased. Drag the whistle icon of the mount you want the stats from to the Equipped slot below, and the one you wish to see in-game to the Appearance slot. Click the "Click to Summon Mount or Drag to Hotbar" button and your Appearance mount will be summoned. Drag the icon to your hotbar for a quick way to toggle your mount on and off. 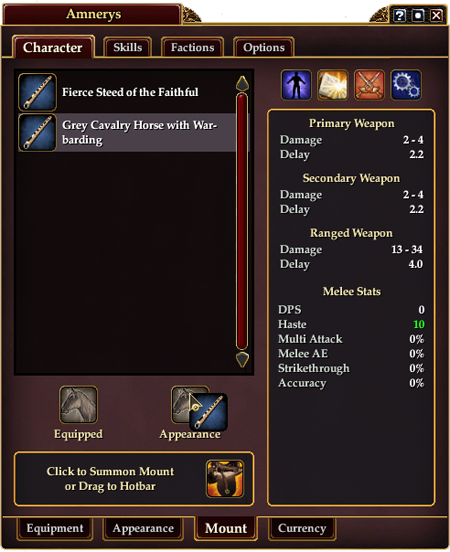 The new Currency tab inside the Character window will give adventurers a place to keep any currency that isn't copper, silver, gold or platinum. Examples include Void Shards, Marks of Manaar, Shiny Tinkerfest Cogs, Seals of Arad, City Tokens, and many other varieties. As you acquire these currencies, they will automatically be added to this window. To add currencies that you are already carrying in your bank or bags, just drag them to the window and drop them in the list area. 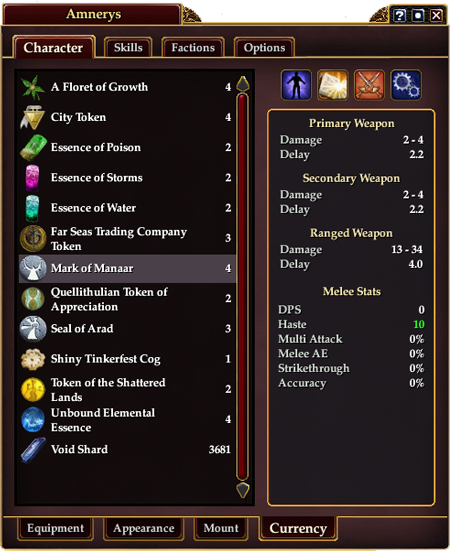 Another change players will see with Arcanum Revealed is the ability to automatically cure any detriments that affect group or raid members by simply clicking on the icon for the detriment. Once clicked, the curing spell will be cast (if the spell is one you've acquired) and you can continue the fight without fumbling around on your hotbars.

Arcanum Revealed (Game Update 58) will be released on Tuesday, October 12, for both EQII and EQ2X.