Feel the Wind Beneath Your Wings with the Aerakyn Player Race!

Don’t miss these unique characteristics for the new Aerakyn race!

Are you ready to start an adventure with a unique new player race? Get ready, because Aerakyns will soon be available for you to customize and start your journeys! Players will be able to purchase the new Aerakyn race from the EverQuest II Marketplace beginning November 11, 2014. Want to learn more about the Aerakyns? Well, we’ve got the information ready for you!

The Aerakyns were once the unwilling soldiers of the great Prismatic Dragon, Kerafyrm. Now free from his thrall, but unable to return to their homelands, they seek to re-establish their culture in Norrath. Since the Aerakyns were used as shock troops by Kerafyrm throughout Age’s End, they are looked upon suspiciously by most Norrathians. Despite the general prejudice against them, the Aerakyns are a neutral race of seasoned warriors who are determined to prove their worth. Let’s take a look at some of the characteristics that really make the Aerakyns stand out from other Norrathian races!

When you create your Aerakyn, you’ll be able to make them stand out in a crowd by choosing from a variety of appearance customizations. Not only can you choose horn types – including facial horns on the male - you can also pick from a wide variety of colors for skin, scale, hair, and eyes that will allow you to create a very unique character. The Aerakyn’s scales are combined with their wing structures so that the colors travel from around their horns and down their necks and arms giving them an all-over striking appearance. 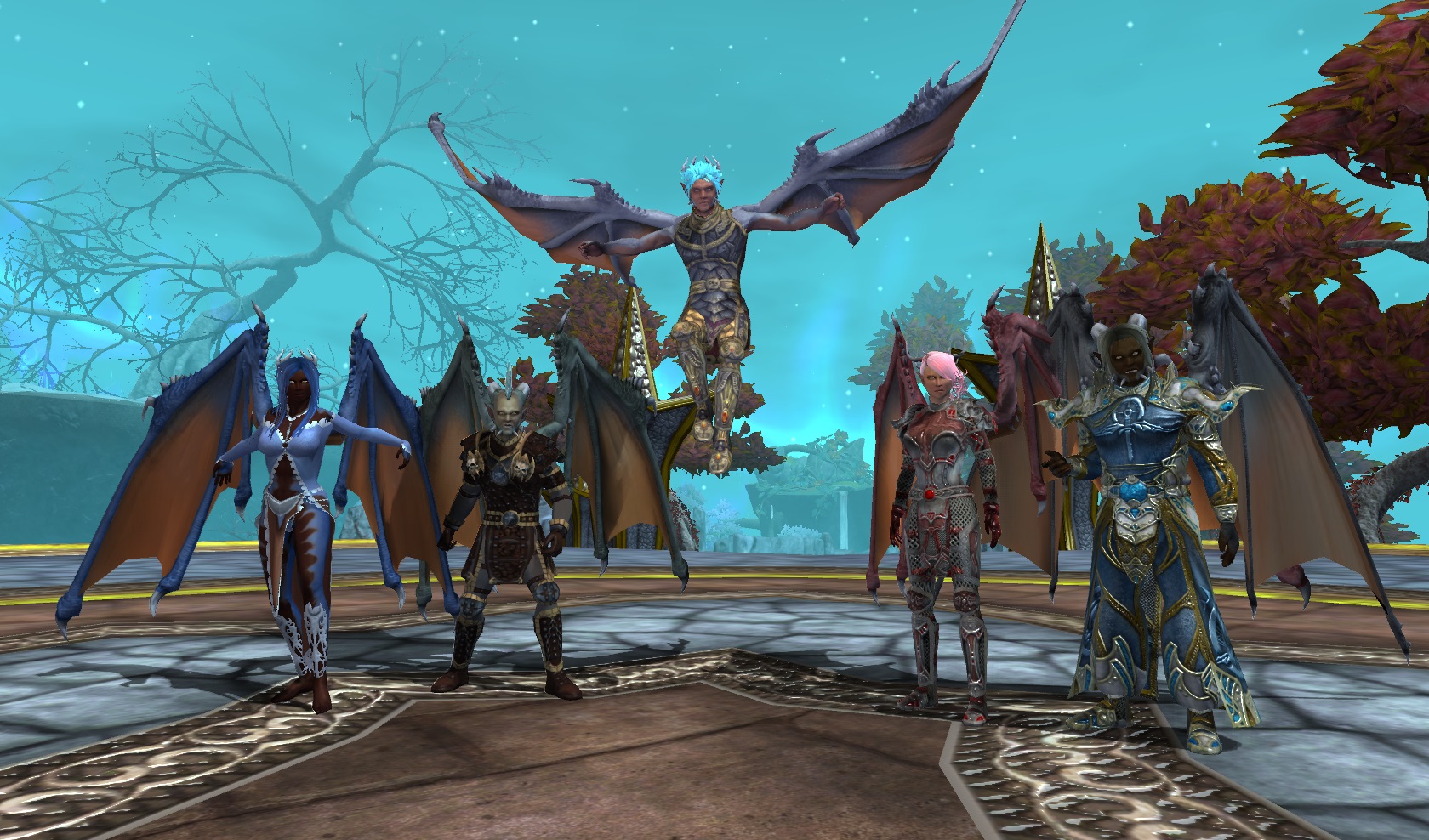 One of the most distinguishing characteristics of an Aerakyn is their wings. Special racial wings are granted at the level 1, 30, 60, and 85 milestones. The standard Aerakyn race will gain new wing appearances at each of the level milestones. The Noble Aerakyn race unlocks the new wing appearances as well as unlocks wing mounts for each milestone. The upgraded wing mounts for the Noble Aerakyns will offer new travel options (such as increased ground speed, leaping, gliding, and flying) at each milestone, making their wings a truly functional extension.

The skilled Aerakyns have also learned how to maneuver their wings during battle! Standard Aerakyns will be able to use wing attack animations while they are unarmed. Noble Aerakyns will be granted a special appearance weapon that can be used in a weapon appearance slot, allowing them to play wing attack animations while wielding weapons in equipment slots. 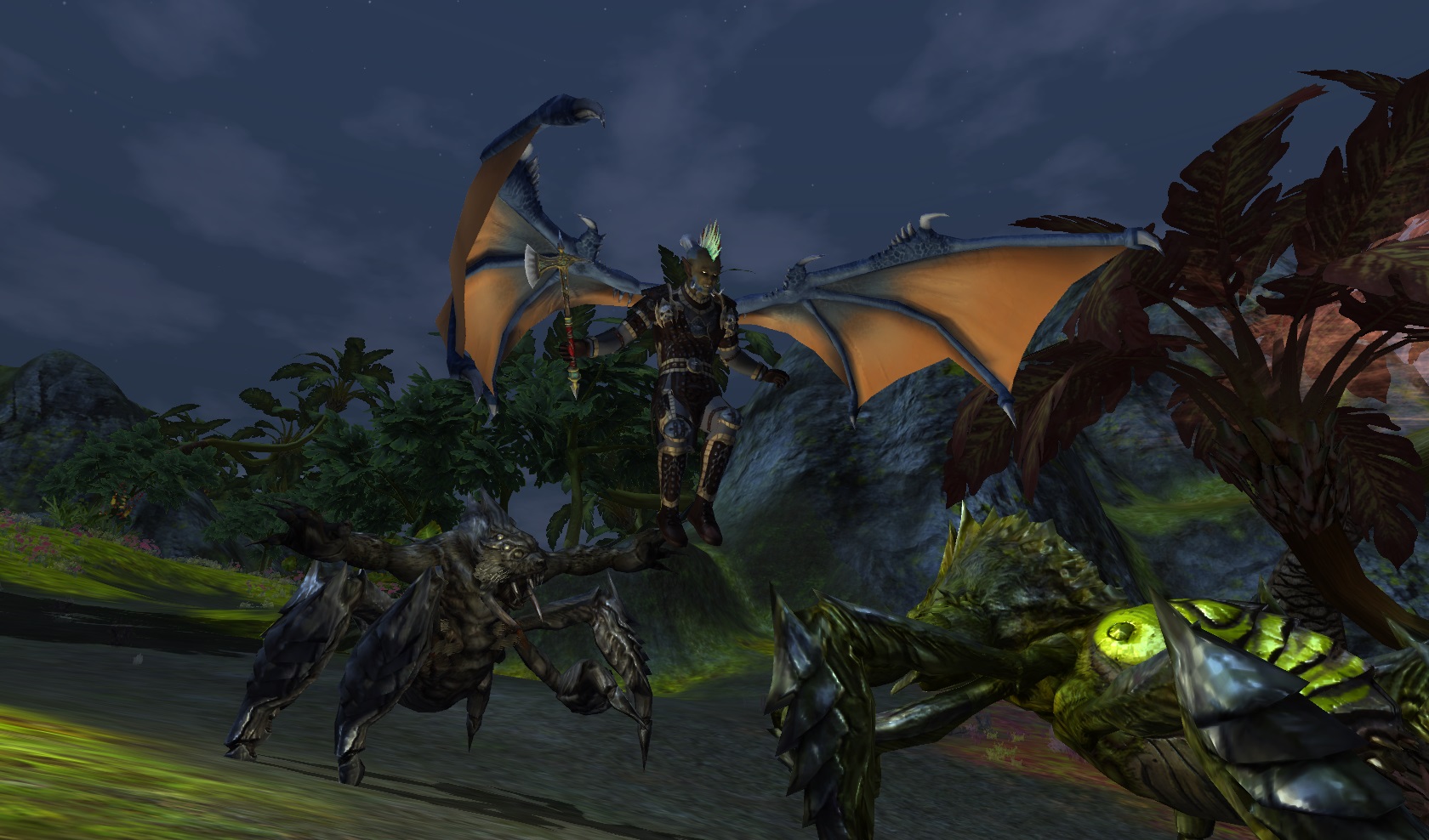 In addition to a striking appearance, animated wing attacks, and enhanced wing mobility, the Aerakyns also have a special trait specific to their race. The Aerakyns are born with a unique ability called Pyrebreath Bulwark, which provides an elemental cure and ward. This resilient race definitely has an innate tendency towards survival!

You can’t have a new player race without uncovering the amazing lore that brings these Aerakyns into the cities. There is a racial quest in two of Norrath’s most-notable cities – Freeport and Qeynos. Through these quests, the Aerakyns will learn more about where they come from and why they now seek to establish themselves in a new home. 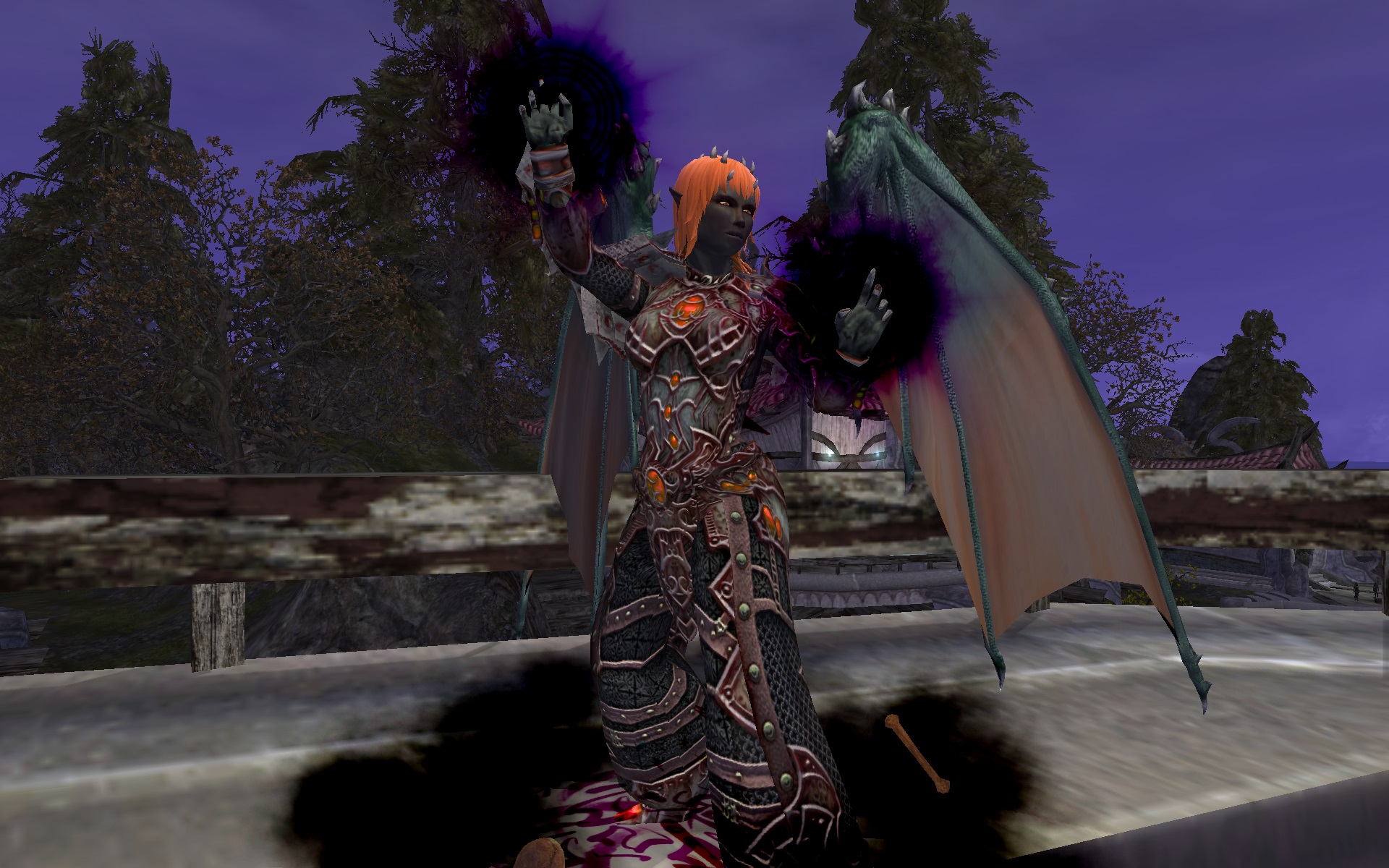 Now that you’ve seen some of the amazing things that go along with being an Aerakyn, you’re probably wondering “How can I play one?!” There will be two types of Aerakyns available to play: the Aerakyn, a standard version of the race, and the Noble Aerakyn, an upgraded version of the race with additional features. Players will be able to unlock access to the new race from the character creation screen or by accessing the in-game Marketplace. The following Marketplace options will be available so that players can choose the combination that works best for them:

The Aerakyn race will be available for 2000SC. It includes racial traits and appearance wings. New appearances are unlocked at Adventure or Tradeskill milestones levels 30, 60, and 85. The Aerakyn will also use wing attacks when unarmed.

The Noble Aerakyn will be available for 4200SC. The ability to use wing mounts and a special appearance weapon help set this noble Aerakyn apart. The wing mounts offer travel benefits through Adventure and Tradeskill milestones that begin at level 1 and increase at levels 30, 60, and 85. These benefits begin with a run speed increase at level 1 and increase to leaping, gliding, and finally flying added at each subsequent milestone. The Noble Aerakyn also receives an appearance weapon at level 1 that allows the Aerakyn to use wing attack animations while wielding weapons.

This upgrade will be available for 2200SC. It will add the Level 1 ground speed increase wing mount and the ability to earn 3 additional wing mounts upon leveling (leaping, gliding, and flying) and includes the appearance weapon at level 1. The character is granted wing mounts at level 30, 60, and 85 and will be granted all the level-appropriate wing mounts upon upgrading.

Do you desperately want to create an Aerakyn but don’t have any more character slots? Players will be able to purchase the Noble Aerakyn together with an additional character slot for 4800SC.

Players will be able to purchase a Noble Aerakyn with a Heroic Character upgrade bauble and character slot for 7700SC.

It’s time to create an Aerakyn and venture through the lands with your majestic, draconic wings! What aspects are you looking forward to the most about the new Aerakyn player race?

Don’t miss these unique characteristics for the new Aerakyn race!

Share On:
Previous Article News Archive Next Article
Return Home to the Isle of Refuge Prestige Home
Celebrate Ten Years of EverQuest II at the Heroes…
Download
Filter By: