Diary of an Off-Duty Server Hamster

Since the servers are locked in preparation for Chains of Eternity™, two server hamsters decided to wander around the SOE campus in San Diego. 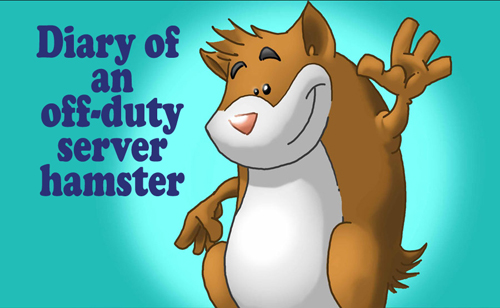 Good morning, intrepid Norrathians! It's two of your loyal server hamsters. While the servers are down to prepare for Chains of Eternity™, we get to hop off our wheels for a while and wander around the SOE offices. Here's a glimpse at what sort of trouble server hamsters get into while the game is offline… 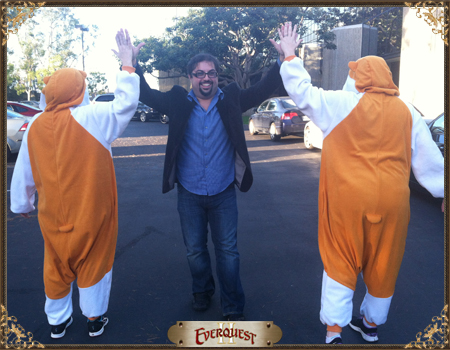 It's time for the hamsters to head back to the server room and get those wheels running! Thanks for visiting with us on our time off-duty, and we hope you enjoy Chains of Eternity™!

We knew we'd need to get back to running the servers soon, so we decided to opt for a quick outdoor workout: 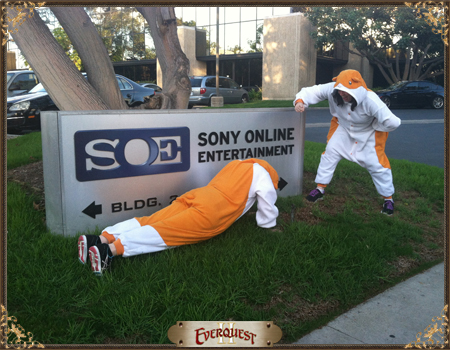 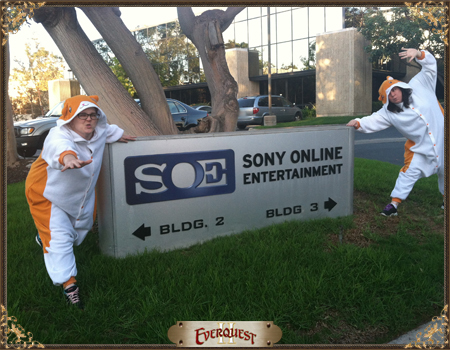 While we were getting back into server-running shape, we ran into our fearless Dwarven leader, Linda "Brasse" Carlson! Of course, we had to ask about Chains of Eternity™!

Hamsters: So, Brasse...what are you looking forward to most on launch day?

Hamsters: And what are you most excited about in this new expansion?

Brasse: As a hardcore explorin' Dwarf, Oi am most' lookin' forward ta tha new zones. Tha artwork an' zone design in EQII is seecond ta NONE in tha industry an' Oi am always blown awae by them.

Brasse gave us a look that said it was time for us to make our way back towards the server wheels! We'll be back at noon with an update on the server status!

Love, your Off-Duty Server Hamsters (whom you may recognize as Aimee "Ashlanne" Rekoske and Colette "Dexella" Murphy)

We made our way into the EverQuest II development area and got a chance to chat with Chris "Phatkins" Atkins and Carlos "Gninja" Mora!

Hamsters: Okay guys, we've been asking everyone this – what are you most looking forward to on launch day?

Phatkins: "I can't wait to see our updated concept art in the loading screens and finally a new Character Select screen."

Gninja: "Jumping in game and playing through all the new content on my characters!"

Hamsters: That all sounds awesome! Now, what is your favorite part of Chains of Eternity™?

Phatkins: "The Eidolon Jungle is amazing to look at. I'm happy with the Lizardmen and their poison frog wielding shaman!"

Gninja: "I would have to say my favorite part of the expansion would be the unique and absolutely stunning art found in the expansion!" 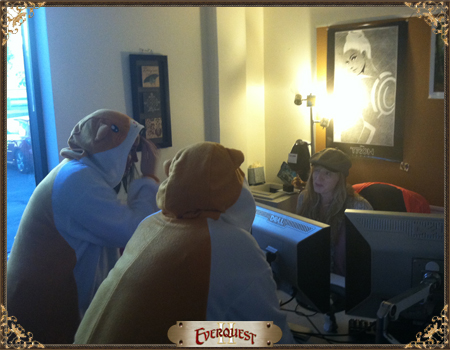 We knew Holly had to get back to important launch day tasks, so after our quick picture, we headed out. Where would we end up next? 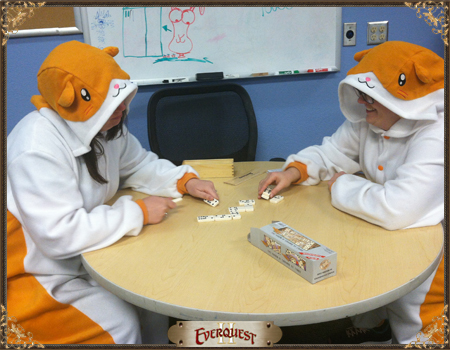 …until we realized we have no idea how to play dominoes. So we headed outside to see what sort of mischief might be waiting for us. We ran into a very playful little puppy that, thankfully, happened to like hamsters: 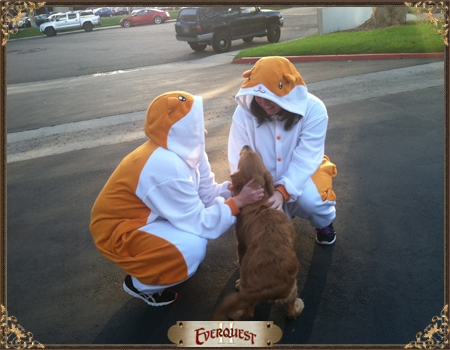 While we were trying to teach the puppy that hamsters are not chew toys, we spotted Kenneth "Terrogaunt" Roecks and Jason "Fyreflyte" Woerner heading towards the development area. We flagged them down to ask about what their looking forward to when Chains of Eternity™ goes live later today!

Terrogaunt: "My favorite part of the expansion has got to be the Ethernere. I know, that's probably a bit vague, but I just love the whole concept of it! The stuff that is going on inside of the Ethernere is absolutely fantastic, as is the raw idea of the place, itself. I'm stoked to run all of my characters through there and experience the quests that pertain to one of my favorite Norrathian gods!"

Fyreflyte: "My favorite part of this expansion is the dynamic feel of the zones. The art is breathtaking, and we spent a lot of time forming quests that help show that off. Many of the areas are changed through your actions, and that always feels really rewarding to me as a player."

We also wanted to know what they were most excited about on launch day!

Terrogaunt: "Players always use the systems we make in ways that we never thought or sometimes never thought possible. I'm really excited to see how all of the new features that we've implemented are used and how big of an impact they have, since I have been extremely excited about every single feature I've put in from the moment that I was first given the task."

Fyreflyte: "I'm really looking forward to watching everyone run through the solo quests in Eidolon Jungle. There's some really cool content in there, and it's always fun to hear others talking excitedly about the quests and monsters as they discover them for the first time."

We decided to follow Terrogaunt and Fyreflyte into the development area. Stay tuned for what we saw and who we ran into there!

We're back with another update! After our coffee break and chat with Dave "Maevianiu" Kish, we decided to play a few matches of table tennis! 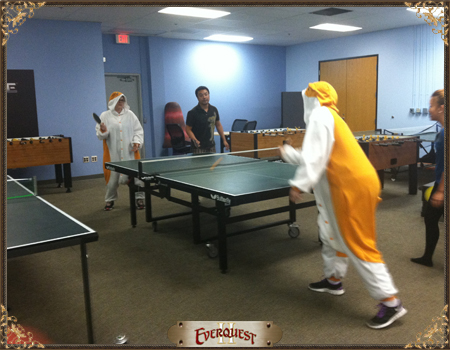 But, as hamsters, we ended up being more of a hindrance than a help to our teammates, so we headed over to play a little DCUO on the PlayStation 3. 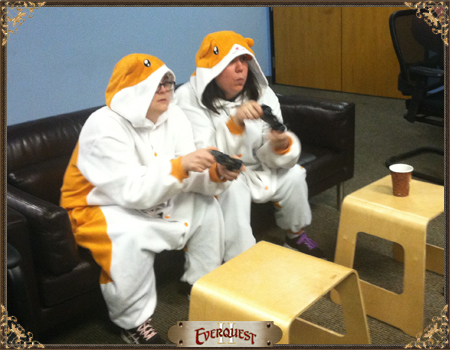 Though our attention was fixed on the console, we overhead Abby "Ahma" Watt and Aaron "Gnobrin" Bisnett talking about Chains of Eternity™! Here's what we heard …

Ahma: "I'm looking forward to seeing the team's hard work on the expansion finally be accessible to players. I've been watching this expansion grow and come together over the course of several months, and it felt like launch would never come!"

Gnobrin: "I'm looking forward to watching adventurers as they go about cracking new content open! I really can't wait to see what they think on opening day and the weeks beyond! There are so many things to see and so much lore that they're going to able to take part!"

We hamsters couldn't let them get away without answering what they were most looking forward to in Chains of Eternity™! Here's what they had to say about that:

Gnobrin: "My favorite part of the expansion is the fact that this is one of the first times EverQuest II has explored new territory, with places adventurers have NEVER been (and returned, that is). It's awesome that the afterlife has finally been opened to our stalwart adventurers!"

Ahma: "There's a lot to choose from—the art, the storyline, Tradeskill updates, and a bunch of other things that I'm excited about. For now, I'll say my favorite part is the quest dialogue in Eidolon Jungle and Obol Plains. There were a couple of points where I actually laughed out loud when I read my response options."

While we loved talking to Ahma and Gnobrin, hamsters can't sit still for very long! We were off on another adventure…check back later for more details! 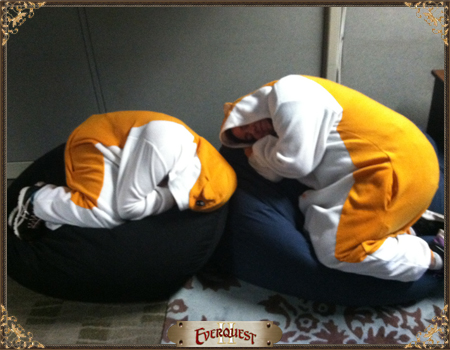 First things first – a quick nap! After all, we've been running those servers for hours, weeks and months on end…. 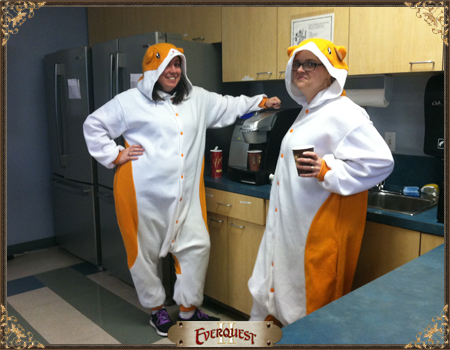 Next we head to the break room to perk up with a cup of coffee. While sipping the java, we ran into Dave "Maevianiu" Kish! We took the opportunity to ask him about the expansion!

Hamsters: Hey, Maevianiu! What are you most looking forward to about launch day?

Maevianiu: Playing EQ2 again with a bunch of my friends who are coming back for the expansion. New dungeons and raids!

Hamsters: Maevianiu, what is your favorite part of Chains of Eternity™?

Maevianiu: Spirit Stones. I like the idea of an item that you have to do something special to make it grow in power.

He headed back to work, and we headed off to see who else we could find! Check back later for more updates on our adventures outside the server room wheel!