New items are added to the marketplace weekly! Here’s a look at the latest addition.

In addition to the items made by Norrath's amazing and friendly crafters (available through trades and the in-game broker), you can purchase an assortment of services, items, and features with Station Cash from the EQII in-game Marketplace, to enhance your gameplay experience. Appearance armor, mounts, prestige homes, and server transfer tokens are just some of the items available.

New items are added to the Marketplace weekly. Here's a look at the latest additions as well as some special featured items to help you show your allegiance to Antonia or your loyalty to Lucan. Will you choose Freeport or Qeynos? 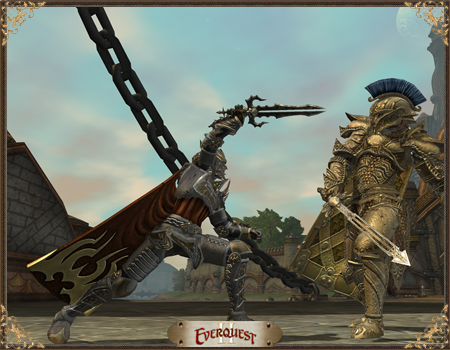 Do you desire to show your allegiance to Queen Antonia? Or is representing Lucan's love of opulence more your style? Battle your foes and honor your city with glimmering appearance armor. Each armor crate includes spaulders, cuirass, gauntlets, greaves, gussets, sabatons, a cloak, and a helm.

Fly high above the lands of Norrath astride the back of a Pegasus clad in the armor of your treasured city. The light flanks and shimmering wings of the Qeynos Protector Pegasus shine across the skies of Antonica as a beacon of Queen Antonia's goodness, while the midnight coat and white-hot flaming hooves of the Freeport Guardian Pegasus provide an ominous visual of Lucan's power.

As the political strife in Qeynos continues to escalate, Antonia's fine city needs more of her people to stand proud outfitted in the armor of the city. The Qeynos Protector bundle includes the new Royal Qeynosian Armor and the Qeynos Protector Pegasus.