You may have heard in Podcast #110 that Dave "Smokejumper" Georgeson has been promoted to Executive Producer! We sat down with Dave to find out more about his new role and what it means for the EverQuest franchise. 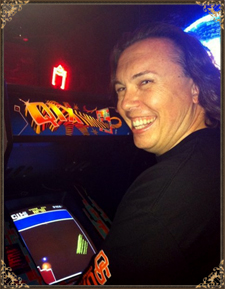 As you may have heard in Podcast #110, Dave "Smokejumper" Georgeson has been promoted to Executive Producer! After the podcast, EverQuest Community Manager Eric "Piestro" Cleaver took the opportunity to sit down with Dave and find out a little more about his new role and what this means for the EverQuest franchise.

Piestro: Hi Dave. I think the first question the players will have for you is how do you feel about EverQuest?

Smokejumper: It's amazing. 12 years old and still fun. There's a lot of stuff in EQ that other games have just simply forgotten, and much of it is great!

Piestro: Do (or did) you play EverQuest? If so, what class and level is your character?

Smokejumper: I played for a solid two years after EQ first launched, and then stopped until about a month ago. Back in the old days, I played a Troll SK and a Dwarf Cleric as my mains, but my favorite character was a Wood Elf Bard. Twisting for the win! Currently, I've been playing a Beastlord and I'm up to 45 now and climbing.

Piestro: Is this a big shift in personnel? What's happening to Tom "Phathom" Terrazas?

Smokejumper: Thom is still the Producer in charge of EverQuest. Thom and I work closely together on strategy and feature slates, but Thom runs the team and still "makes the magic happen."

Piestro: Is EQ going to shift directions now and be more like EQII?

Smokejumper: Absolutely not. EQ is its own game and we are unlikely to do anything stupid like trying to make it more like "XYZ Game," regardless of which game we're talking about. In fact, the team is already focused on the next expansion pack, so there are unlikely to be a large number of changes happening anytime soon. But we are discussing some fun stuff to begin after the expansion. More on that later...

Piestro: How about EverQuest II? Will you still be actively involved with that game?

Smokejumper: I'm still very much attached to EQII and work closely with the leads on that project. We recently promoted Emily "Domino" Taylor to become the Associate Producer on EQII, specifically to shore up the fact that I would have less time in each day to spend on EQII. So far, it's been working very well. The team didn't skip a beat during the transition, and in fact, things are probably better now than they were previously because we're able to split up the tasks and I can focus more on the game's quality and business direction.

Piestro: Is there anything else you'd like to say to the EQ community?

Smokejumper: EverQuest is the granddaddy of them all and I'm excited to work with such a beloved game and world, but also to interact with a community that loves their game to the point where they've kept it thriving for over a decade now. We'll be extremely careful and reverent with the game, while at the same time doing everything we can to make it even more fun than it is now. I'm extremely excited to be working with this franchise. It's quite literally the opportunity of a lifetime. I hope to meet a bunch of you at Fan Faire!