Once upon a time, you were faced with an important decision… A decision that would impact your identity, that would define yourself and your group of companions… You had to choose a guild name.

Once upon a time, long ago and far away, you were faced with an important decision … A decision that would forever impact your identity in the world of Norrath… One that would define yourself and your group of companions, setting you apart from the others…

You had to choose a guild name.

Alas, you no longer feel that “Knights in White Satin” truly holds that special meaning that it once did, and you’re kind of regretting the dozen glasses of xegonberry wine you drank at the first guild meeting. They really were quite tasty, but perhaps not the wisest choice…well, it happens. 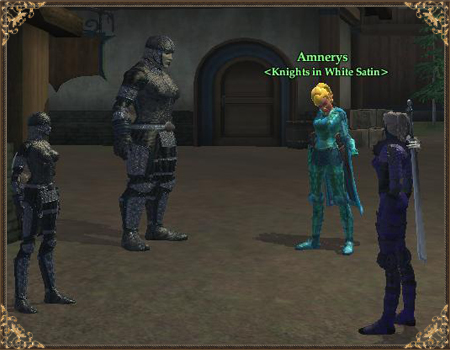 Fear not, good citizens of Norrath! …Alright. And evil citizens, too. You can now release yourself from the eternal walk of shame of an embarrassing, ill-thought-out, or otherwise no-longer-desired guild tag hovering so delicately over your head.

We are pleased to now offer a Guild Rename Potion, available on the EQII Marketplace, for the price of 5500 Station Cash.

The choosing of a guild name is a very important rite. To help ensure that your new name is considered carefully, we are introducing the potion at the price of 5500 SC. We believe this price is fair for those who do want a name change, but will also serve as a deterrent to those who might want to frivolously rename their guild every time they have a kerfuffle in the lands of Norrath. In addition, we advise foregoing the wine next time, and sticking with blossom tea, or perhaps fayberry fizzlepop for guild meeting refreshments while you pick a new name.

There has always been the option to disband a guild and create a new one with the desired name, but think of all the work and sacrifice that went into Guild XP and levels! 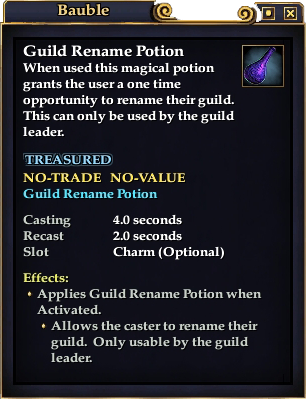 Guild rename potions will only be visible to and usable by Guild Leaders. No sneaking around and changing your guild’s name to “Your Mama Wears Dwarven Underpants,” just before you drop guild and have a good laugh at them.

The goodly helpers who keep an eye on things behind the scenes will also be able to track the name changes that a guild has gone through, a measure taken to be sure that the “Ipwnurfacenoobs” guild can’t harass other citizens, then simply do a name change and disappear off the radar. We’ll know where you’ve been…

So, there you have it! Your chance to redeem yourself (and your reputation as one of the foremost guilds of Norrath) is just a trip-to-the-Marketplace away. That means you, “Omg Hi Kthxbye” guild. You know that was a hasty decision, but it’s ok. We’re here for you.