With the launch of Echoes of Faydwer, City Festivals are now on the TLE server!

If you’ve been wandering through the city of Qeynos since the launch of Echoes of Faydwer on Thursday, April 7th, you might have notices some festivities going on. That’s because the City Festivals are now available on the TLE server! 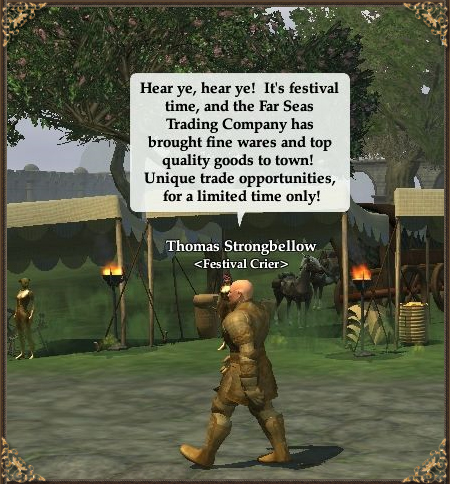 Since EoF launched on the last day of the festival on the live server, this month the Qeynos festival will be hanging around on Stormhold through Thursday, April 14th. If you’re yearning to experience the fun that these festivals provide, head to Qeynos now!

In May, the City Festivals will be back on track with the Live servers, occurring from the 1st through the 7th of each month. Remember, the festivals move from city to city, so keep an eye out to see where the Far Seas Trading Company will be heading to next.

Important Note: At this time, the Aether Races that are part of the City Festivals on Live Servers are not available on Stormhold.

The coming of the City Festivals also means that beginning on April 20th, Stormhold will also have Moonlight Enchantments available! This special event comes around just once per month, on the 20th and 21st, so don’t miss out!