Vishra has penned an important letter. What could its contents reveal? Read on for more in this special lore feature!

He patted the envelope in his left breast pocket. It was still there, as it always was, but old habits die hard.

The letter within was penned what felt like ages ago. It was looking likely that he would take as long to send it as he did to write it. There was always something—the wrong time, the wrong place, the wrong mood, the wrong company.

Satisfied that the letter was still safe in its envelope, albeit more weathered and wrinkled than it was the day before, Vishra began the process of strapping on his armor. Greaves first. Left, then right. His hafling squire orbited around him like a dutiful moon. The best squires were shadows, always present, always near, but never in the way. Tipple was one of the best.

His plate hung heavier today than it usually did. Truthfully, it wasn’t just the plate. It was weight of the years, the weight of the coming battle, the weight of the damn letter. He’d faced the worst Norrath could throw at him and here he was, a nervous little boy too meek to tell a woman the truth. This was one of those things that time never made easier—except to make excuses.

He punched one of the wooden beams supporting the pavilion with his gauntleted hand. Tipple didn’t flinch. Instead, he carefully lifted Dawnbreaker, the sword that could cleave morning itself, and began strapping it to his charge’s back with the aid of a stepstool.

Vishra believed with every fiber of his being that she deserved to know, needed to know. To him, she was the heart of Norrath, holding up everything while it all threatened to fall down. And she did it with grace and poise and strength. More strength than he had ever shown.

“Tipple, today is the day. If I can’t summon the courage to finally do this one simple task, if I turn and run like I have so many times before, if I break like some half-trained conscript, then may the gods strike me down.”

Vishra strode out of his pavilion, light gleaming off his filigreed armor, with only the blue velvet of his sash refusing to participate in the spectacle. He looked every bit the hero people spoke of. Of course, they didn't know that his stomach, tied in knots, was liable to let go of his breakfast at any moment.

He had one opportunity, a meeting with her scheduled in a few hours. It would be easy. Simply walk up to her and hand her the envelope. There were too many things at stake to let this continue to weigh on him.

Vishra made his rounds—speaking with his soldiers, poring over battle plans, talking contingencies, and acquiring the razor focus he needed to face the Awakened - Kerafyrm’s shock troops and syncophants.

It was late morning when he started toward the meeting area. He saw her, every bit as beautiful as the day she was born. She waved. He returned the gesture.

“Vishra! Good to see you. Are you ready for this?”

He made a deep bow, “I am, my liege. Knowing Lucan, I think he’ll be on board with our plan. It’s direct, to the point, and vicious.”

“Let’s hope so. Arguing with him is exhausting.” She grabbed his arm, “Shall we off?”

“…You’ve grown into a superb leader, a woman that our whole nation can look up to. I want you to know I’m very proud of you…” He stumbled over those last few words.

Red crept into Antonia’s cheeks and she gave a little laugh, “Th-thank you, Vishra. I’m very proud of you as well. I could not have done any of this without you at my side. Anyway, enough of this. We will have time to pat ourselves on the back after Kerafyrm is put to rest. Let’s go see Lucan.”

And that was that.

Hours later, Vishra stormed into his tent, fumbled with his right gauntlet, clumsily worked at the straps and flung it into a corner with a snarl. Tipple ran over and began laboring on the left gauntlet, deftly removed it, and then started on the breastplate. But even Tipple's impressive speed wasn't quick enough for Vishra, who clawed at the plate in fury.

Vishra froze, but Tipple could feel his body vibrating with tension under the armor. Tipple quickly unfastened it, pulled the chestpiece away, and retreated into his corner.

As soon as the plate was off, Vishra was in motion again. He grabbed the envelope from his breast pocket, tore it open, looked at the letter, and then crushed it in his fist. He took three, slow, very deep breaths. To Tipple, it looked like he was trying to calm himself, but Vishra suddenly roared—a primal, furious, and somehow plaintive bellowing of emotion. It conquered its entire vicinity like a pack of wolves howling at the moon.

There was a commotion at the flap of the tent as two guards rushed in, spears at the ready. Tipple hurried over and silently waved them off—they didn’t want to be in here, they didn’t hear anything, and they definitely didn’t want to see Vishra when he was like this. The guards gave each other confused looks before warily backing out of the pavilion.

He finally ran out of breath. Tipple sighed in relief and moved to his comfortable corner, his eyes on his charge, hoping that the worst was over.

Vishra stood, his back to the entrance, head down, for a very long time. Minutes passed and the only life Tipple could see from him were the breaths he took every so often.

Finally, in a gravelly whisper, “I’m sorry. That was uncalled for. Thank you, Tipple.” 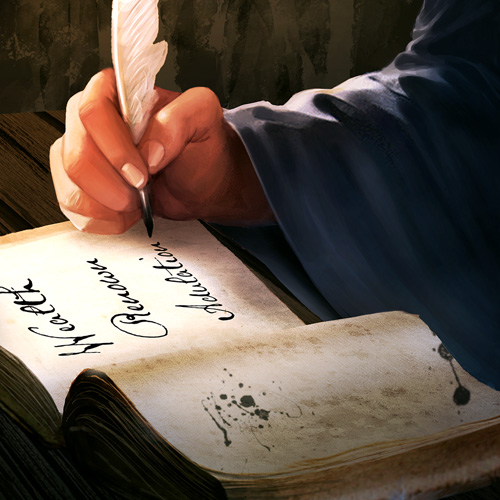 Vishra slowly sat down at his desk. His fist relaxed bit by bit as he placed the letter on the cool wood. He spent a long time smoothing out the wrinkles, his hands running over the paper until it mostly lay flat. Then he read:

I have written and re-written this letter so many times. It is something I should have given you long ago. It is with love and pride and a small bit of regret that it only reaches you now.

We’ve travelled the world, Antonia. We’ve seen everything there is to see and more. I’ve watched you grow from a small, awkward (but adorable!) waifling, into a powerful, beautiful ruler of her own kingdom. One of my fondest memories is of us fishing off the portside of Dawnfall when the wind was still and refused to blow. It was so hot, the waters so calm, but you never complained. You just smiled…and when you caught that first sea bass…I’d never experienced anything like it before. Even after so many years apart, that bond was still there, unbroken. Whenever things turn black, I travel back to that day and that smile.

I do not know why it is so hard for me to say the words I want to. Years of pretending to be something I am not—it makes the lie harder to admit. Some combination of fears—fear of hurting you, fear of distracting you. Fear of losing you. I am not afraid of many things, but this, our relationship, it is something I cannot live without. You give me the strength to face down demons, to look Kerafyrm in the eye. If I lose you, then I myself will be lost. I am a pitiful man, Shirrana, and it is because of this weakness that the lie has continued this long. It stops now, though, and I can only beg your forgiveness.

If I seem overbearing at times… if I seem overprotective… if I treat you too much like my daughter… it is because, well…

It is because you are.

I am lucky. The Sisters of Tearfall exile the fathers when their daughters are born. Most of them never get to see their children grow, but I was given the opportunity to raise you from a distance, council you and protect you as if you were mine. Your mother and I loved each other very much, and it was her love and foresight that set these things in motion. I wish she could see you now, but she would not be surprised. She would be proud, just as I am.

You are probably experiencing some combination of confusion and anger. Or perhaps just the calm assuredness Norrath knows you for. I understand that it will take you some time to process this and come to peace with it. When you are ready, we can sit down with some wine and talk. I can tell you the real story of how you came into this world and discuss whether you have room for an old soldier to be your father.

In the meantime know that I love you, Shirrana, and that you have been loved since the day you were born.

He absently pawed at one of the drawers on his desk, his hand finally finding a new envelope. He carefully folded the letter, placed it in its new home, and lodged it in his left breast pocket.

To discuss this piece, as well as other information about the history of Norrath, visit the History and Lore section of the forums.

"Tome of Wishes" art by Lan Jun Kang, from Legends of Norrath.