On April 17, 2012, the Destiny of Velious saga continues! Adventurers breach the barriers of the Withered Lands, seeking entrance to Skyshrine, the glorious, ancient dragon city! 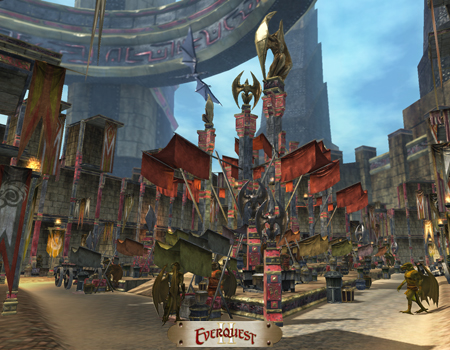 The Destiny of Velious saga continues! Adventurers breach the barriers of the Withered Lands, seeking entrance to Skyshrine, the glorious, ancient dragon city!

The great citadel of Skyshrine has long housed the Claws of Veeshan behind its massive walls and arcane protections.  Now, the unthinkable has happened -- Skyshrine is under siege! Battle and befriend dragons and their wurmkin in the forbidden city of Dracur. Explore the past to unravel the mysterious events that transformed the formidable draconic city into a battlefield full of daunting challenges, terrifying foes and unimaginable treasures!

Far below Skyshrine a different battle rages on. Once known as the Wakening Lands, a majestic valley touched by the Plane of Growth, today oddly overgrown and overrun by a sickly magic… and now known as the Withered Lands. This strange corruption has affected not only the land, but has touched and twisted many of the creatures that once thrived here, including the legendary caretakers of the forest. Now turned to a dark purpose, the caretakers cultivate the afflicted plants and animals. In the deepest regions of the creeping woods, chaotic storms drench the forest and singe the gnarled treetops, where an angry dragon flies menacingly overhead!

Save the forest from corruption, aid the armies of Norrath in reaching Skyshrine, explore the intrigues of dragonkind and save their embattled city!