Learn about changes and updates coming to PvP with the February 26, 2013 update!

A mini-game update is coming on Tuesday, February 26. Included in this update are a number of tweaks, changes, and updates coming to PvP! Colette "Dexella" Murphy chatted with Brian "Omougi" Ferguson about what players will see and experience after the update.

Brian "Omougi" Ferguson: We are adding blue adornment slots to Imperial PVP charms, necklaces, cloaks, belts, and weapons. New blue adornments to fill these slots will be available for purchase in Champion's Respite. These new blue adornments can add a passive effect, like a regenerating ward, or an active effect, like a lifetap proc, to your gear. Many of these blue adornments will increase in power if you equip multiples of them in different slots, so you'll want to mix and match to find the sweet spot for your character's build. These effects will only activate in PVP combat. 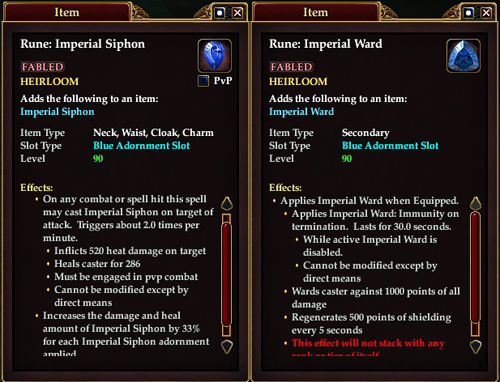 Dexella: There are also armor set bonuses coming. Can you explain those?

Omougi: We've added set bonuses to Imperial armor, earrings, rings, and bracelets. The armor set bonus will further improve your toughness and PVP critical mitigation. The jewelry set will make your character more powerful in several ways, mainly by improving the ability power of your character. 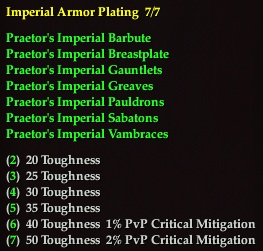 Dexella: What are some of the other key features of this PvP update?

Omougi: A large portion of this update has been spent working with our PVP community to further fine tune our class balance and continue to improve the overall PVP combat experience. Additionally, we are improving the open world PVP hotzone rotation to include some more interesting & relevant zones. We are also improving what our Toughness and Lethality stats can do for you at lower levels, so it's easier than ever to get into PVP!

Dexella: Will these updates be in Battlegrounds, Open World PvP, or both?

Omougi: The PVP hotzone improvements will be for Open World PVP only. However, the rest of this update will improve the PVP experience in both Battlegrounds and Open World PVP!

Thanks, Omougi, for sharing this sneak peek about the PvP updates! Stay tuned for more information about other features and content coming on February 26 to EverQuest II!