Summer is finally here and the team is toiling away! 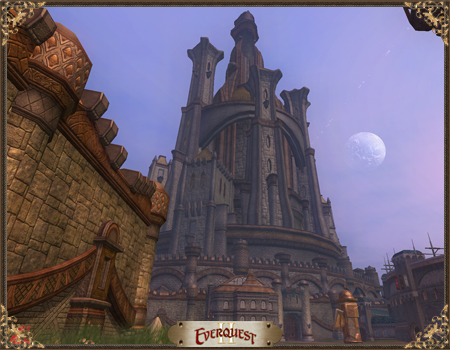 Summer is finally here and the team is toiling away! We've got a few new faces added to the team and we're going to introduce them with some awesome headshots.  On to what we're working on...

The new Qeynos is rife with intrigue and conflict as the city, Queen Antonia Bayle, and the Circle of Ten evolve and struggle to oversee the welfare of the goodly folk of Norrath. As is in most places in Norrath, power can tip the scales. The new racial quests, which are available at all levels, offer history and an introduction to your origins as well as a sense of your place within your race while experiencing the Qeynosian struggles. The new class and storyline quests, starting at level 20, drop you amidst the city's strife with your brethren all the way to the high court.

We have updated Player vs. Player (PvP) in several significant ways and I'll highlight a few here. For details, you can read this preview of the changes.

Improvements include new and revised stats so the focus is on player skill, rather than primarily on gear, which is how it should be! Also, the ways tokens are earned have been adjusted to be more rewarding overall and there is a LOT of new gear starting at level 10 to spend tokens on. Another change we are happy to report is that we have returned to a system where your PvP stats are derived from PvE stats (and vice versa), which allows players to be effective in both styles of game play. This will make PvP more accessible overall.

In addition, we have changed Battlegrounds to make it more fun, rewarding, and accessible for everyone. Anyone of any level can join a match from level 30 to 89 and be effective. We call this style of game play "Level Agnostic." Levels 90 to 92 will be in their own category for matches.

Class Focus Effects have been consolidated and will now be available starting at level 9 and then every 9 levels in the Character Development window. General stat bonuses will be applied for every focus effect chosen. Class and Alternate Advancement ability dependencies do apply, but the progression is logical. That is, in order to select a focus effect for an ability, you have to earn the ability first. For more details, check out this post. When this change goes live with the Qeynos Rises Update, items with foci adornments will offer a currency refund.

DUNGEON MAKER - PLAY AS YOUR CHARACTER

Fighters will receive a new stance called "Recklessness," allowing them to do significant damage while sacrificing their ability to withstand damage. Also, fighter heals will be percentage-based, making them easier to understand and modify. A change to Strikethrough means that if you use a temporary buff to avoid NPC strikethroughs, you should actually notice the difference and take less damage. More detail is available in this post.

We have made some tweaks and polished the newbie experiences for the New Halas and Neriak starting city areas to make them more rewarding and fun. Neriak's Darklight Woods got a much-needed art overhaul which adds to the ambience of eeeeevil. New and better armor sets are available to level 20 and we will recommend that players opt for New Halas or Neriak upon entering the game their first time.

One of our quest changes allows you to find NPCs that update your quests with easy-to-see icons next to their names. The other improvement is the ability to use quest items directly from your quest journal without having to go into your inventory. It's amazing what a difference those two changes make! Both will be live as of this week. Some minor adjustments based on feedback will trickle out also.

We hope the newbie zone polish, coupled with  these changes for questing, will improve the introduction of our game to new players and bring even more enthusiastic Norrathians into our community.

There is more coming! We will announce limited-time content for the summer that you won't want to miss. No spoilers yet, but I'm thrilled that we're going to be advancing the world story in subtle ways that have a real benefit to the community.

We've seen a lot of enthusiasm with the technology so we are going to make sure it's ready before we go live with it.  Stay tuned!

Please get on Test and Test Copy servers and help us make the best content possible for you. We find we get really great feedback when players participate. It makes our game better.

For instructions on how to get your character over to Test Copy, go here.