Designer Michael “Xelgad” Ganz talks about improvements to the Focus Effect system that are about to hit Test!

Hey all, Xelgad here! I wanted to explain some of the improvements to our Character Development window that you will be seeing on Test Server soon.

The biggest change is that class foci from armor will instead be granted through the Character Development window. Carried over from tier to tier for years, these foci have become part of the standard class more than a reward for acquiring high end gear. You can choose one bonus every nine levels, starting at level nine. 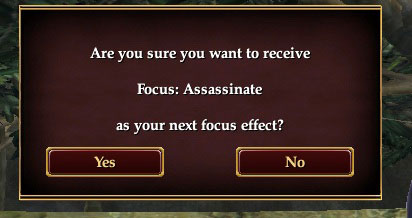 (Do you really want this? Of course you do!)

To select a specific focus effect, you must first have access to the ability being modified. For example, an assassin will not be able to select Focus: Assassinate until they are level 50. They would be able to use the level 54 selection to choose Focus: Assassinate or they can save their level 45 selection until level 50 and access it immediately. In the case of foci that modify Alternate Advancement abilities, such as Focus: Noxious Enfeeblement, you will have access to the focus effect as soon as your character's adventure level is high enough to access the ability in the Alternate Advancement tree - regardless of if you have purchased it or have enough points to buy it. You can also change your selections by visiting the Advancement Counsel NPCs located in the main cities.

Additionally, almost everyone was choosing the same health and power, attribute, and mitigation traits. These traits were functioning like simple stat bonuses as you leveled, so we decided to consolidate these traits into the bonuses based on class foci. Now, every time you select a new focus effect, you will gain increases to both health and power, health and power regeneration, your primary attribute and stamina, along with noxious, elemental and arcane mitigation. An adornment refund system is in place to return the currency spent on foci adornments you may have already purchased, to make sure you don’t lose out on the currency you have already spent on them. 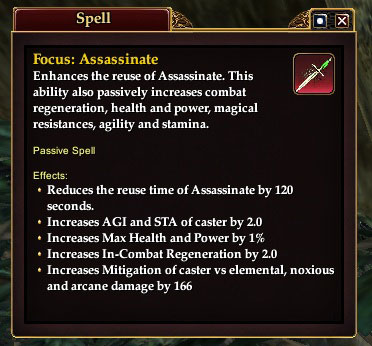 There are also five generic choices that can be selected instead of class abilities. All of these generic options have no level restrictions. They include Potency, Crit Bonus, Stun Resistance, Snare Resistance and In-Combat Movement Speed.

We look forward to reading about your impressions of these changes on the Test Server!

For more information on accessing the Test and Test Copy Servers, please see this post.