We wanted to wait until after E3 to share a few more details about what we're up to and what's coming up this month. 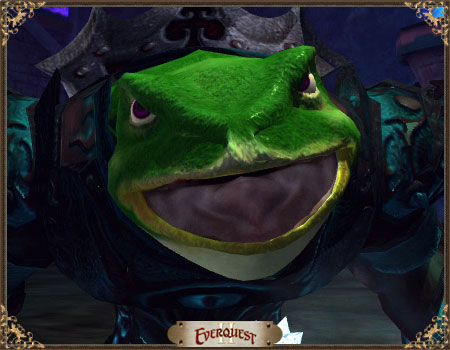 Another month has zipped by already!

We wanted to wait until after E3 to share a few more details about what we're up to and what's coming up this month.

By now you may have heard about the SOE corporate initiative called SOEmote(tm) that will launch in EQII later this month. SOEmote uses a webcam and microphone to project your facial expressions, including talking and voice, onto your character in real time! It's used in groups and also allows you to broadcast to your guild, almost like a webcast. We're all excited to see this launch and how you use it. If you want to share your shananigans, the YouTube recording option is now in the EQII Share window.

Also the next week or so, the ability to play as a character in Dungeon Maker will be opened for Testing! We want your input before we push this addition to Live servers. You will be able to group with friends of any level and be competitive in the dungeon content. Take the time now to design a dungeon in the decorating contest and get ready to play your dungeon -- as your character!

Also this month, you will see polish and improvement to Darklight Woods and Halas. In Darklight Woods we did a fairly quick art pass -- because it wasn't up to the team's standards -- which in just a week has given it a lot more ambiance and character. This came about through a quick conversation where an artist and designer volunteered to take a week to see how we could bring a bit more sparkle to the newbie experiences. Itemization is improved and a new armor set was created for each area. When we update these two zones this month, first-time players will see Halas and Darklight highlighted as newbie zones. Subsequent characters will see all newbie zones as they are displayed now. This was an obvious way for us to bring all new players together to build community from the get-go.

Whenever we can, we want to improve the playability of the game. On the test server you may have seen that NPC names now include an icon if it updates a quest, as well as an icon that indicates what type of quest it updates. The NPC's details window also shows the title of the quest the NPC updates. One of our programmers, Andy Roecks (Terrogaunt), gave this idea a shot as a quick task and nailed it. He's been chasing some oddball quests that have unique types of interactions so send us /feedback or /bugs if you find NPCs that should have icons.

At the same time, Andy added the ability to use quest items directly from the quest journal HUD by clicking on an item icon. No more will you have to fish around in your inventory to find quest items!

Behind the scenes we have been updating our core technology as well. The updates are well worth it and will improve development and performance for us. Part of the update that will be apparent to players is a new in-game browser that is more stable and flexible. We plan to use it going forward for tutorial videos and communications.

The bulk of the team is putting their hearts into the new Qeynos. Like Freeport, new characters, quests, and stories have been added that bring new life and context to being a citizen depending on your race and class. Qeynos will be two zones given the sheer size and detail of the city. North and South Qeynos will become the Capitol District and Qeynos Harbor and Elddar Forrest will be the Provincial District. The neighborhoods, like Willow Wood and Baubbleshire, will be used in the quest content.

Last, and certainly not least, we are very excited to bring some much-needed fixes and improvements to PvP and Battlegrounds that will be fun and easy to access for everyone. We will be posting details very soon as well as opening up the changes on Test Copy. Battlegrounds, like Dungeon Maker, will allow different levels of characters to play together and be competitive. Also, PvE armor will be effective in PvP again so everyone can easily jump into Battlegrounds without becoming squishy, and PvP players won't need an extra set of armor or be vulnerable while adventuring on the Nagafen server.

Thanks for taking the time to read all this. And while this message is long, it certainly doesn't include everything we are doing, like the expansion development. We look forward to sharing more about upcoming developments in the future. We can't wait to see what you think!