We are extremely pleased to bring you the new Dungeon Maker feature set. For the first time, you and your fellow players can create new content for the game, play through a constantly changing list of player-created dungeons, and get rewards whether you are a dungeon builder, adventurer, or both!

We are extremely pleased to bring you the new Dungeon Maker feature set. For the first time, you and your fellow players can create new content for the game, play through a constantly changing list of player-created dungeons, and get rewards whether you are a dungeon builder, adventurer, or both!

We recently ran groups of press folks through a "tour" of the Freeport revamp and the AoD feature set. We ended each tour with a demo of Dungeon Maker and what it could do, and we were met with a lot of excitement about the potential once players get their hands on this stuff.

There's a lot to be excited about, and if you aren't currently involved in the beta testing (at present about 4000 of you *are* involved), then you haven't seen much about Dungeon Maker yet. So here's a preview so you know why this feature will be fun, as either a builder or an adventurer.

Let's look at both sides of the story!

The best way to walk through this exciting feature is probably not a big list of details, but rather, a "Day in the Life of the Dungeoneer." What do you do? Why is it fun? How does it all work, anyway?

First, you need to find a dungeon that suits your play style. This is easy, especially if you're already familiar with the Housing Leaderboards that are already in-game. You pull open the Dungeon Leaderboard interface from your EQII menu, and choose one of the available dungeons by sorting them either by publish date, player rankings, challenge rating, or just by checking the latest, greatest Hall of Fame offerings. 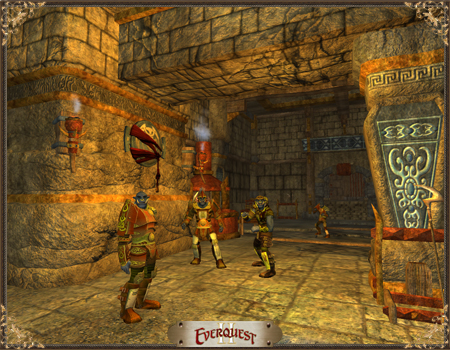 Regardless of which dungeon you choose, all you have to do is select it and then click the button to enter, from anywhere in the world. You can either explore the dungeon solo, or enter it with a group. The dungeon scales its encounters up automatically depending on your group size, so the more the merrier!

Once you've chosen a dungeon, you and your friends zone in. The first step is to choose which Adventurer you want to use. You get four Adventurers to start with, but new Adventurers can be found in other ways, such as loot drops out in the game world. (There are about 50 different Adventurers potentially obtainable at launch!)

Each Adventurer has 4-5 abilities and varying stats. Each is designed to fulfill a different role when playing through a dungeon (tanks, dps, support, etc.) When you first pile into the dungeon, each person can select from any of the Adventurers they have collected. You'll have a group window where you can see which adventurer each person in your group has selected, and you can watch the Adventurers change as your groupmates make their choices, allowing you to plan the best party composition.

Once everyone has chosen which Adventurer they want to play, you hit the Ready button and start exploring!

You can fight as much, or as little, as you want in that dungeon. What's the goal? To survive through the dungeon exploration until you find the exit point. Once you reach the exit point, and are ready to leave the dungeon, you click it to get your rewards in the form of XP and dungeon tokens. However, the rewards you earn will depend on the degree of challenge that you defeat while in that dungeon, so sneaking through without killing anything will not gain you as much reward as fighting your way through.

The XP for all the challenges you've overcome throughout the dungeon is awarded all at once when you click the exit point, and the XP goes to whichever character you are logged in as when you play Dungeon Maker. Additionally, your character gets a reward of dungeon tokens to spend on armor, weapons, potions, Dungeon Maker items, and more. However, these tokens can be given to any of your characters, so rewards earned on a dungeon spree can be literally spent on any of your characters, not just the one you currently have logged in.

Dungeon tokens are easily spent by going to the Marketplace and clicking the "Dungeon Maker" category and browsing there like you would any other marketplace category; however, you pay with dungeon tokens you earn by playing (instead of Station Cash).

And lastly, once you complete a dungeon run, you also get a chance to rate the dungeon you just played. This means that any ratings left for a dungeon occur only after the player successfully completes the dungeon by reaching the exit point.

Now to look at the flip side of the story!

So now that you know how to run through a dungeon, you'd also like to know more about building them, right? Here's the scoop.

In your Persona window, you'll notice you have a new tab called "Dungeons". This is where you'll find a list of all the dungeons you have created, as well as any dungeons that other people have given you trustee access to. To start with this list will be empty, so click the "create" button to get started! 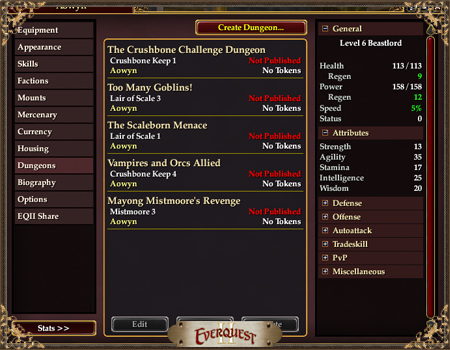 When Dungeon Maker launches, there will be three available themes of dungeon based on the styles of some of our classic dungeons from previous expansions: Crushbone, Lair of Scale, and Mistmoore. To start out, everyone gets three basic dungeon layouts they can manipulate, one of each style theme. These starter dungeons are intentionally small so they're relatively easy to populate and try out.

However, there are lots more layouts out there to collect, all of which are larger and more complex than the starter dungeons. You gain these layouts either through loot drops (out in the world) or by spending dungeon tokens you accumulate in the Dungeon Maker category of the marketplace. There's also a unique layout included in the Age of Discovery collector's edition, including themed objects to decorate it with. 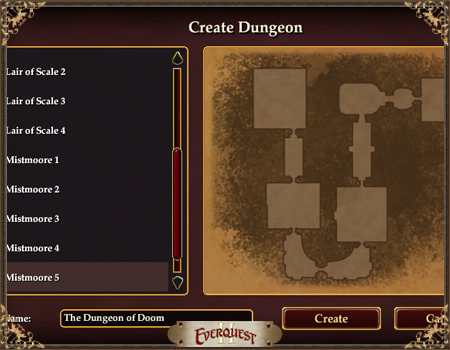 Choose the dungeon theme and layout you wish to use, and assign a name to your dungeon. Then just click Edit to enter that dungeon in edit mode and being making changes. You can also grant your friends trustee access to your dungeons if you want assistance or advice in making your creation!

One of the first decisions you'll make is where to put your Start and Exit objects. There are default locations in each dungeon, but these are regular items and you can move them anywhere you so desire. (And you can change your mind at any time and move them at will.) 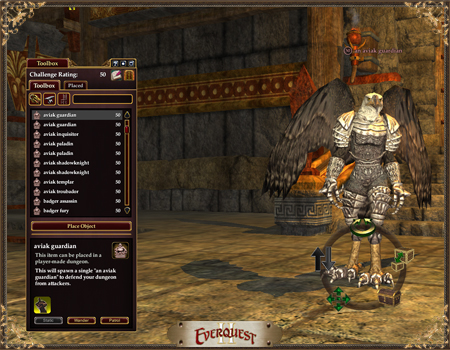 Then you will also place monster spawners, effect objects and decorations to populate your dungeons. (Side note: Layouts and spawners can be found out in the world, usually in heroic content, but some items/layouts may also be purchased using dungeon maker tokens in the Dungeon Maker category of the marketplace.)

Effect objects are interesting and powerful. These are objects that have special additive powers and they affect any nearby spawners after they are placed (a max of two effect objects can affect any single spawner). Effect objects do things like turn individual spawners into encounter groups (so they all attack at once), or adding fire magic to their weapons, or buffing or altering their abilities in any one of scores of ways. So altering your monsters is as easy as dropping in new objects in the room around them. No muss, no fuss. 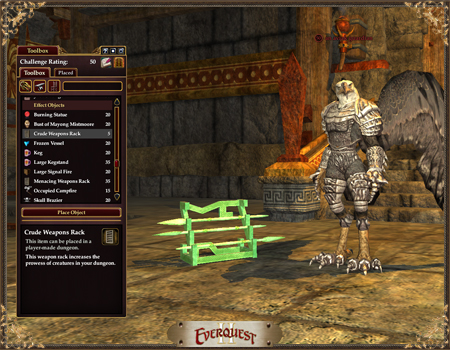 You can also place monster spawners, of course. Plunk down a spawner and then make it either a static spawn, a wanderer, or a patroller, all with an easy click or two. Spawners fall into three categories to indicate the degree of difficulty of the fight: "Boss", "Elite", and regular. You'll start with a selection of spawners already available, and there are plenty more of all these types of spawners to collect.

Then edit the names of the monsters (if you so desire) and even give them custom aggro and death dialogs so they say different things when encountered. Additionally, you can scale the spawners up/down pretty wildly, so if you want the race of orc giants, that can be done.

Each dungeon layout has some basic decorations already set up as a default, and you can just use these as is, move these around, or remove them. In addition, you can also put your own spin on the aesthetics of your dungeon by decorating it either with Dungeon Maker-specific virtual items which you will find in your toolbox (which you can obtain via loot drops or token purchases), or by using *any* standard furniture item (whether loot drop or tradeskill-created). These objects *do* have collision when placed, so you can make some really creative stuff. (However, remember that if the experience is bad, then adventurers can bail at any time...and ratings are likely to be negative...so builders won't be able to 'trap' players this way.)

Once you're done setting things up, publishing your dungeon so others can start playing it is as easy as clicking the Publish button and taking a quick screenshot. (And this isn't permanent, you can un-publish and re-publish as many times as you like.)

Builders earn rewards based on how many tokens that players of their dungeons have received. So, the more individuals that play your dungeon, the more you were successful in delivering what players like, and the more rewards you receive!

So that's a quick look at both sides of the Dungeon Maker experience. We've made a lot of changes already based on your feedback from beta, and we are also compiling a list of suggestions we'd like to add post-launch. We hope you'll find Dungeon Maker as exciting and compelling as we believe it is, and we look forward to the launch of this ground-breaking new feature next week!