The city stirs under a newly venerated sky. The clouds that once choked the horizon have parted, revealing a powerful presence, now returned. The Overlord has returned and Freeport is reborn.

The city stirs under a newly revitalized sky. The clouds that once choked the horizon have parted, revealing a powerful presence, now returned. The tall, jagged towers and looming citadels, at once breathtaking and ominous, are lit up by massive, fiery braziers. The Overlord has returned and Freeport is reborn.

I too have returned to the city. I return to reclaim my rightful home. My family has lived here for generations. When violence erupted, we were forced to seek shelter elsewhere, sundered from our homes and scattered across Norrath, waiting for the Overlord's return.

When he disappeared, other major powers in the city sought to overtake Freeport and claim it for themselves. Their faith in the Overlord was weak. The Freeport Militia, Seafury Buccaneers, Dismal Rage, and even the scholars in the Arcane Academy vied for control. None could trust each other and raids on our homes happened nightly in the resulting struggle. Chaos became the only order. The city fell to pieces without the Overlord.

We knew he had returned when the clouds dramatically cleared over the city, as if by force of his will. Even those of us that were not there could feel it, deep within. Upon his return, the Overlord took a foothold in the city like we've never seen. At once he called his loyal followers back to the hearths of Freeport. Within days, he contracted hundreds of skilled artisans to rebuild the ruins of his mighty citadel. He resurrected the structures and breathed new life into the very fabric of Freeport. The majesty that arose in the wake of his gaze was unlike anything we had ever seen. The rubble and grime were gone - taking their place were gilded streets and towers, giant statues of the Overlord and even tapestries with his insignia. The city was new again.

The Overlord then walked among us, delivering his charismatic oratories. No one could turn away from him. How could they? He had come face to face with the God Slayer and lived! He talked of alliances amongst ourselves - of banding together to fight the true evils in the world. He spoke of the infiltrators from Qeynos, who had surely started much of the infighting in his absence.  He reminded us of our strength, our pride and our cunning. Under his renewed leadership, we would overtake our rightful lands. 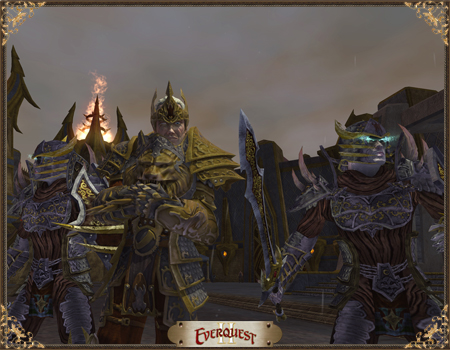 (The new Freeport will be available for free to all players with Game Update 62, coming early December, 2011!)
Also, check out PC Gamer's exclusive EverQuest II trailer showing off the evil city of Freeport here: http://www.pcgamer.com/?s=freeport