There are many new and exciting features coming with the Halas Reborn game update in May. One of the new features is the Storyteller system.

There are many new and exciting features coming with the Halas Reborn game update in May. One of the new features is the Storyteller system.

What is the Storyteller system?

The Storyteller system is really a modification to the quest journal window UI. It adds a Storylines tab that will collect the overarching story behind each major quest series in one place.

What does the Storyteller system do?

The Storyteller system consolidates the storylines related to various quest series into a single, easy-to-follow format so adventurers can better keep track of the underlying story being told in their current quests.

How will it help me and my friends?

The Storylines window will allow you to see where you are in the storyline related to the quest series you are working on. It can help by providing hints from previously completed steps, give clues as to where a series starts, as well as help you to pick back up on the series if you've been away from it for a while. For those who like to know the story and WHY they are helping NPC Bob to lay waste to the gnoll population, this will prove highly beneficial.

This is a working model and not the final product of the Storylines window. 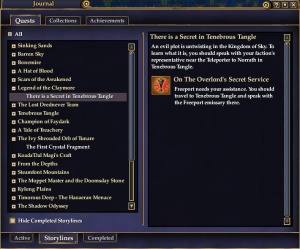 Why aren't all my quests in the Storylines window right now?

Quest lines will continue to be added to the system over time. What you see when Halas Reborn reaches the live servers will only be a starting point, and other quests will be connected and looped as we progress the feature. If you don't see your favorite quest right now, don't worry! It will be there soon.

What are your thoughts on this new feature? Join the discussion about the new Storyteller system over on the Official EQII Forums.